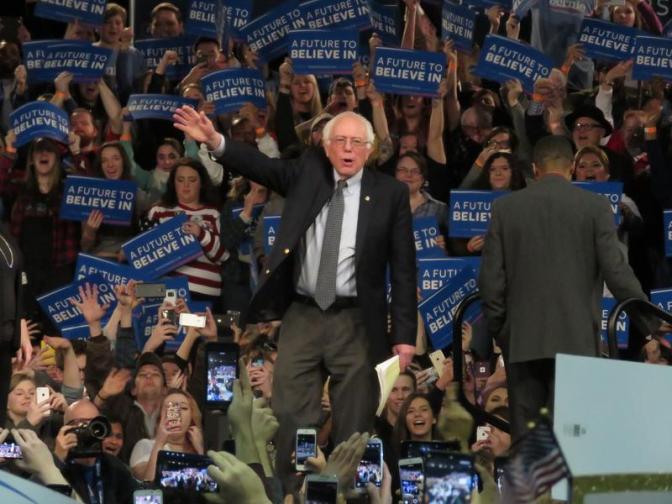 As usual, I spent my morning checking out my usual news websites – Politco, ProPublica, the Center for Investigative Journalism, the New York Times, the Washington Post, and the Washington Times. As I browsed the headlines of the Washington Times, I came across, “‘Bernie or bust’: Clinton can’t count on Sanders’ supporters in November” by Kelly Ridell.

The article was quite interesting, as it told the story of a movement called “Bernie or Bust” where  Bernie Sanders’ supports say they would never vote for Hilary Clinton. Over 50,000 people have already registered at Revolt Against Plutocracy. Registrants pledge they will vote for the Green Party candidate or write in Sanders’s name if Clinton wins the nomination.

“I will not be voting for Clinton if Sanders does not win the nomination,” Jon Clemens, a Sanders supporter from Hartford, Connecticut told Ridell. “She has done nothing to earn my vote, and the Democratic Party should not assume that she will simply absorb Sanders’ supporters. Clinton has only ‘evolved’ to progressive political stances when public polling indicated to her that it was politically advantageous to do so. She is disingenuous, has little integrity and lacks vision.”

Though I agree with Clemens’ statement about Clinton and wholeheartedly support any rebellion against major party candidates, I would implore Sanders’ supporters to throw their substantial weight behind the Libertarian Party – especially if former New Mexico Governor Gary Johnson earns that party’s nomination (though Austin Petersen would also make a pretty good Libertarian candidate as well).

Those who have been “Feeling the Bern” over the primary season will certainly not agree with everything Johnson (or the Libertarians) believes by any stretch of the imagination. However, Sanders’ voters will find plenty they like when it comes to Johnson and his stance on the issues. Watch this introductory video on what Johnson did to help New Mexico.

Here are a few highlights about Johnson that all voters should consider:

If you’re a specifically a Sanders’ supporter, consider Johnson’s stance on the following issues:

Personal Freedoms and Liberty: The greatest threat to our civil liberty and freedom is our government. Over the past twenty years, the government has done everything to take away our freedom in the name of “national security”: the Patriot Act and other laws have given the national government the right to spy on citizens’ private communications, monitor financial transactions, photograph license plates, demand to know what a person is doing at a public library, and ask a private company to violate its trust with its consumers — all without warrants or due process of law. In addition, the government either has legislates or wants to legislate what we put into our bodies, what we watch, and who we marry.

Finally, the government has spent a lot of time trying to regulate the Internet. It recently passed “Cyber Security” legislation and is in the midst of a legal battle with Apple to find a special “back door” into encrypted, private information held and moved by Internet providers. Of course, the government has proven time after time to be incapable of protecting even the most basic data and have violated the trust of the American people by spying on them (the NSA).

Johnson and the Libertarian Party believe that citizens should be able to make choices and have freedom from regulation on the Internet without scrutiny from the NSA, FBI, CIA or any other government agency.

Prisons: Like Sanders, Johnson believes that non-violent criminals should not be overcrowding our prisons and that, instead of mandatory minimum sentences that crowd our jails and costs the taxpayers millions of dollars with virtually no reward, it makes more sense to allow judges to mandate rehabilitation, counseling, and training for drug offenders and other non-violent criminals.

Of course, Sanders’ supporters are just one side of the coin. There are going to be millions of Republicans who cannot fathom voting for Donald Trump (or perhaps Ted Cruz should Trump implode, which is certainly possible). Johnson’s beliefs (as well as those of most Libertarians) can also find some common ground with Republicans.

Immigration: Johnson was governor of a border state, so he understands the issue of immigration better than any candidate. Using the military to guard the border and building a wall are just foolhardy plans that do not address the problem of a broken immigration system. Johnson believes that a simplified and secure system of work visas will work better.  Aspiring immigrants would undergo a background check, pay taxes and provide proof of employment.

Johnson would advocate Congress to pass a law that makes it simpler and efficient to enter the U.S. legally, which will provide the greatest security possible and allow law enforcement to focus its time and resources on the criminals, who are just a small portion of those who have entered the country illegally.

The Fed and Government bailouts: Johnson apposed all the bailouts, whether for banks or private industry, and believes these bailouts and “stimulus” plans do not work and are a waste of taxpayer money. He believes the Federal Reserve should be audited and all its actions should be transparent.

He’s an outsider: Though Johnson was a two-term governor, he is no friend of those in power. He has repeatedly challenged the status quo and wants to change the way government is run. He will bring change to Washington.

Other: He opposes the death penalty, is pro-choice, supports LGTQ marriage and civil rights, and is against unjust war.

Of course, Sanders’ supporters won’t agree with everything Johnson proposes: smaller government, less government intervention in health care, free trade and school choice are not things the Vermont senator would support. However, Johnson is certainly a far more intriguing and likable candidate than either Hilary Clinton or Donald Trump.

Still unsure, check out this website, take the quiz, and see which candidate fits you best. Here are my results.

One thought on “Bernie Sanders’ supporters should consider Gary Johnson”