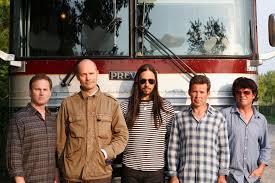 The Tragically Hip will be embarking on its final tour this summer. (thehip.com)

Downie, one of the most charismatic front men in music, was diagnosed in December. A Canadian legend, the news hit hard for fans of the band, which have established itself as a core part of Canadian culture. Canadians (and Americans) posted their well wishes and condolences all across social media Tuesday.

In its release, The Hip acknowledged the unique connection between the band and its fans, stating, “What we in The Hip receive, each time we play together, is a connection; with each other; with music and it’s magic; and during the shows, a special connection with all of you, our incredible fans.”

Downie wanted to do a final tour with the band, which is releasing its 14th studio album, Man Machine Poem, on June 17. The tour, which has no American dates, begins July 22 in Victoria, BC and ends on August 20 in the band’s noted hometown of Kingston, ON. Downie was born and raised in Amherstville, ON – a suburb of Kingston. The members of the band became friends while attending Kingston Collegiate and Vocational High School in Kingston.

The band recorded Man Machine Poem prior to Downie’s diagnosis. The first single, “In a World Possessed by the Human Mind”, was released last month.

Personally, The Hip has been a favorite of mine since the late 1980s. I played “Blow at High Dough” regularly on my show on Salem State College radio (WMWM 91.7 FM) and became a huge fan. Downie’s mystical lyrics and voice brought me in, but the band itself kept me in – the musicianship of the band has always been impressive, and The Hip has been one of the best live bands I have ever seen. I saw them in Boston a couple times, and then had the privilege of seeing them with Dayna and Cam on Canada Day in Toronto last summer.

Throughout the years, Downie and The Hip have played a major role in my musical life.

There isn’t a day that goes by that I don’t listen to a Hip song, whether it’s “Bobgaygeon”, “Something On”, “Poets”, “Wheat Kings, “My Music at Work”, “Grace, Too” or any number of the countless anthems the band has given us over the years.

Though I am not Canadian, I love The Tragically Hip (I often refer to them as the Pearl Jam of Canada when trying to turn people on to the band). I appreciate the Canadian mythology, the music, and the beliefs of the band (they are quite socially-conscious). We plan on catching at least one of the shows this summer, and we will miss The Hip in the future. Few bands have been able to capture the hearts and minds of a country like The Tragically Hip.